To share your memory on the wall of Norman Johnson, sign in using one of the following options:

Norman attended school in Chicago, Ill and Whitehall Michigan.
After graduating from school in 1975 he enlisted into the military (Army) and after returning home from the military he worked various jobs and working as a recruiter for a number of years and retired from working as a Supervisor for the United States postal Service.

Norman gave his life to the Lord at a young age and his heart's desire was to bring forth the word of God as a preacher, Norman truly knew the Lord as his Savior and Loved him very much.

Norman enjoyed playing basketball, golfing, listening to music (Jazz) and spending time with his wife, his children and grand children.
He Cherished and adored his mother Edna Evans and loved her very much.

Norman has 11 grandchildren and 1 great grandson and 1 expecting to arrive in August.
He has a host of nieces, nephews, cousins, uncles and aunts that he loved very much!

To send flowers to the family or plant a tree in memory of Norman David Johnson, please visit our Heartfelt Sympathies Store.

We encourage you to share your most beloved memories of Norman here, so that the family and other loved ones can always see it. You can upload cherished photographs, or share your favorite stories, and can even comment on those shared by others.

Posted Feb 17, 2021 at 10:16pm
To The Johnson family whom I Love and adore, we have shared some good times together in fellowship, to God be the glory! I write with fond memories of brother Norman Johnson, may he rest in peace, I am jealous that for to be absent from the body is to be present with the Lord. So family, take comfort in knowing our faith is not in vain! I have a vivid memory of brother Norman as he referred to me as his home girl because we have at some time in our life lived in Muskegon Michigan. Thank you Mrs. Evans for sharing your son with us Mr.& Mrs. Apostle Arthur Bailey and family. Take to heart and know that in the days coming the Holy Spirit will comfort you, Yolanda and all of your family. May Yehovah! bless you and keep you and anyone who read this blessing, for He is able!
Comment Share
Share via:
CK

Posted Feb 17, 2021 at 08:44pm
My deepest sympathy to Norm's family and friends. I had they pleasure of sitting next to Norm every M-W-F for several years. We had many a laugh and talks of the Lord. On occasion we would ask each other to pray for each other. I know he is up there "jazzin with Jesus".. God speed my Friend. God speed. Char K.
Comment Share
Share via: 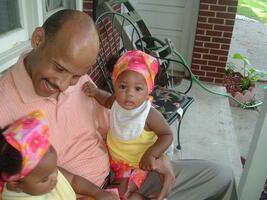