To share your memory on the wall of Bobbie Timms, sign in using one of the following options:

Print
Bobbie Jean Timms, also known as Ms. East St. Louis, was born on August 18, 1931, in St. Louis, Missouri, to James and Anne-Marion McFarland (Thompson). She was the second oldest of eleven children.

In 1949 Bobbie married her childhood ... Read More
Bobbie Jean Timms, also known as Ms. East St. Louis, was born on August 18, 1931, in St. Louis, Missouri, to James and Anne-Marion McFarland (Thompson). She was the second oldest of eleven children.

In 1949 Bobbie married her childhood sweetheart, Nathaniel Timms, and they soon welcomed a son, Michael. In 1953 the family joined The Great Migration and moved to Grand Rapids, Michigan, where she remained until her death on March 19.

After settling in Grand Rapids, Bobbie attended Davenport University and worked as an administrative assistant for most of her career. She was also a faithful member of New Hope Baptist Missionary Church for more than fifty years and during that time served on the usher board and volunteered for many other church activities. Her favorite television shows were Wheel of Fortune, Jeopardy and Judge Judy. Bobbie also enjoyed watching movies, having dinner with friends and family, and shopping. Bobbie had a talent for drawing and was a great seamstress of clothing and Raggedy Ann dolls. She was also known for her great style and beautiful jewelry and was rarely seen without her signature red lipstick.

Bobbie was preceded in death by her parents, James and Anne-Marion McFarland, brothers James, Charles, Clexal, Orlon, Donald and Dennis McFarland, her sister, Gloria Simpson, and husband Nathaniel Timms. She is survived by her sisters, Patricia Branch, Jamillah King and Opal McFarland, her son, Michael Timms, granddaughter, Sharie Latham, and great-granddaughters, Ashly and Sasha Latham. Many others will miss Bobbie and all cannot be mentioned here, but those especially close to her were her niece, Bobbie Ann McFarland, and friends Geneva Morrow, Ann Harris, Mary Thompson and Gladys Anderson.
Read Less

To send flowers to the family or plant a tree in memory of Bobbie Jean Timms, please visit our Heartfelt Sympathies Store.

We encourage you to share your most beloved memories of Bobbie here, so that the family and other loved ones can always see it. You can upload cherished photographs, or share your favorite stories, and can even comment on those shared by others. 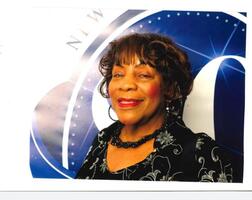